Richard has worked extensively as a storyteller, to children big and small! 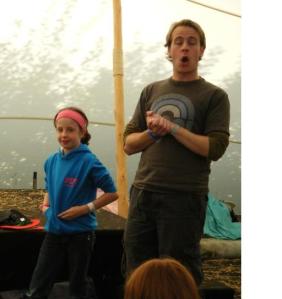 Recent work includes writing and performing his new story The Tidy Fox, originally created for Wild Things in York, and writing and performing original new storytelling shows for NT Brimham Rocks entitled The Giants of Brimham and The Fairy, the Flora, the Leapers and the Lizard. Richard also ran a storytelling project as part of the ‘Voice Within’ project at Cross Lanes Primary, Elland, in which the children created the new story called Mary Beary

“Richard Kay is one of Yorkshire’s finest storytellers. Far from recounting tired old tales, his storytelling is spellbinding and immersive”

“The Voice Within” project for Cross Lanes Primary in Elland

“Play and Tell” project for St. Mary’s Primary, Selby, where the classes devised and wrote their own stories.

“Move motion” project for Priory Woods and Beverley special schools, Middlesborough, where stories and dance were used to help explore and express emotions.

“Back to the Woods” Forest school project at Mcmillans Children’s Centre, Hull, using stories and related activities to explore outdoor imaginative play with young children and their parents.

“Nathan has come out of his shell so much, his confidence is growing and says what he feels….Richard puts so much into his storytelling that it feels like he’s on stage and you’re his audience.”

Richard’s interactive methods of storytelling help to engage an audience and they can then lead onto activities and workshops based around the stories.

Favourite authors to perform include Julia Donaldson, Tony Mitton, Roald Dahl, Maurice Sendack, Martin Waddell plus many more. Richard has also written a number of his own stories, including Bike Story for Tour de France themed workshops at Applefields Special School,  In a Land of Old with St. Mary’s Primary in Selby and Tidy Fox for Wild Things storytelling events.